Confused about when to turn your baby forward facing in the car?

By law, babies can legally face forward in the car from 6 months of age and baby capsules are generally used to 6 months of age, so many parents presume that baby can go straight to a forward facing carseat once they turn 6 months old. But is this really the safest option? 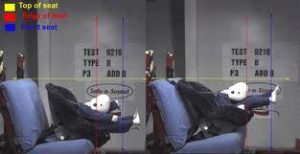 According to Kidsafe Australia, more children die from injuries sustained by or in motor vehicles than from cancer and diseases of the nervous system combined.

Many parents turn their babies forward-facing at 6 months because the law says they can, unaware that this could put their baby at risk of serious neck, head and internal injuries in a collision.  In a front-on collision, your baby’s head will snap forward abruptly which can cause considerable, sometimes permanent damage to their spine.  It is not just a matter of head strength.  Just because your baby holds their head up well doesn’t mean they are strong enough not to suffer this kind of injury.

Babies aren’t small adults and they’re not built the same way as an adult so the risk of serious injury in a car crash when they are forward facing is very real. Babies have surprisingly heavy heads in relation to their bodies: the average nine month old child’s head makes up 25% of his body weight, while an adult’s head only makes up 6% of its body weight.  In a forward facing accident the body is restrained by the inbuilt harness, but your baby’s head is not so the force of the accident will snap their head and neck forward quite sharply, even in a minor accident.

We suggest to our customers that they guided by the baby’s weight rather than his or her age. If your child is six months old but only weighs 8.5kg, he or she can and should stay in their rear-facing restraint until she weighs enough to move to the next stage seat. There are many affordable products on the market today that will allow the average child to rear face beyond 6 months old.

When considering whether to move your baby to a forward facing restraint, it’s important to consider safety but also the needs of your family. Some parents report that their babies are very unhappy in the rear-facing position and this does need to be taken into account if its so distracting you can’t drive!