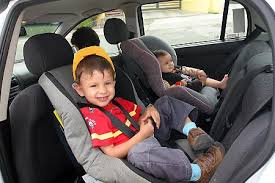 This post is Part 1 of a 6 Part Series written by our Restraint Fitting Team to try and help parents sort through the many products, myths and misinformation that exist around kids and cars.

Trying to work out which one of the many car seats on the market to buy or hire as your babies first restraint product can be confusing. We know you want a quick answer – what’s the safest? The path to making a choice these days is more bewildering than ever, thanks to a raft of product innovations and the recently implemented National child restraint laws introduced in 2010. If you don’t know your locking clip from your top tether, or what a travel system is all about, let us help cut through the confusion.

What are the rules?

Laws across Australia in relation to kids and cars are the same, in every State and Territory. Children must be in an approved child restraint from birth up to 7 years and require:

Children aged between four years and under seven years to use an approved forward facing restraint OR an approved booster seat.

There are also laws for where children can sit in vehicles:

What are the penalties?

So why is rear facing so important?

Most parents are keen to move their child into a forward-facing car seat as soon as possible, so parents seeing the switch as a milestone like baby getting first teeth or taking his or her first steps. Understandably, parents think their baby will be happier facing forward and getting a better view of the world. This may be true in some cases but its a huge risk to take. The baby doesn’t understand that they’re much safer facing rearwards in the event of a collision so its up to us as parents to manage that risk for them.

The most dangerous collisions tend to be front on and a child in a forward facing seat will be flung more forcefully forwards. Additionally, the load of the impact on a baby’s body in a forward facing seat will inevitably be concentrated on the harness area (read – on baby’s internal organs), whereas in a rearfacing seat the load of deceleration is spread across the shell of the car seat, so it’s less concentrated and a much lower impact load on baby. Also in a rear facing seat the baby’s head movement will be much less, so the risk of serious injury to their head and neck will be much reduced (this is a particular issue for babies as their heads are larger relative to their bodies than those of older children and adults).

So much research evidence has built up on this from crash testing that Europe is introducing new laws to keep babies rearfacing until 15 months.

We recommend you keep your baby rear-facing as long as possible.

Here are some guidelines on switching:

Part 2 to follow next week – how to choose a rear facing restraint?